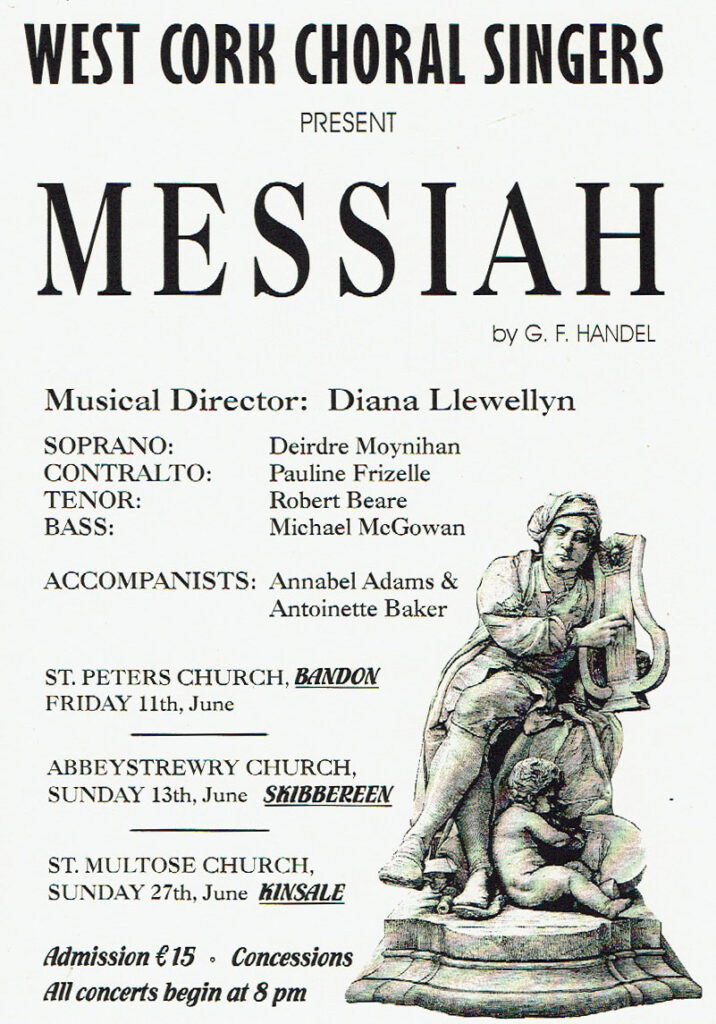 We have all heard Handel’s Messiah in large concert halls and been understandably impressed by the grandeur of the occasion, the volume of the massed voices and the power of the full symphony orchestra.

However, this is a fairly modern concept and, in Handel’s day, the performances were altogether less extravagant and rather more intimate; and this was the treat that Diana Llewellyn, the MD of the West Cork Choral Singers, set before us at Abbeystrewry Church in Skibbereen, last week.

With only the single choir, four soloists, an organ, a ‘keyboard’ harpsichord and a solo trumpeter at the appropriate point, the performance was not only a new and refreshing experience for some of us but also, in this more modest format, we experienced an audience participation more akin to the theatre than the concert hall.

How rewarding it was to be close enough to see the effort of the singers, the interaction between choir and conductor, and the teamwork that goes on – even between accompanist and ‘page-turner’. Couple that with the excellent acoustics of Abbeystrewry and a choir that were ‘singing their socks off’ and there were times when the hairs stood up on the backs of our necks.

The soloists, Deirdre Moynihan (soprano), Pauline Fitzelle (contralto), Robert Beare (tenor) and Michael McGowan (bass), were excellent, as was the trumpet soloist Carbery O’Sullivan, and great credit must also go to accompanists Antoinette Baker on the organ and Annabel Adams on harpsichord. But the greatest accolade goes to the West Cork Choral Singers themselves, for an outstanding performance of precision and verve, which washed over us and gathered us in as we basked in the glory of one of the great masterpieces of sacred music.

It seems churlish to offer a criticism but, perhaps I should mention that the choir trouping on and off on occasions (no doubt necessitated by the lack of space) was distracting and, with only four tenors and four basses, the male voices were sometimes a little overwhelmed – but all credit to them, nonetheless.  As I was leaving, I heard a gentleman say to his companion ‘You won’t see better than that this year’. How right he was – unless, of course, you can manage to get down to St Multose Church, Kinsale, for their final performance on 27 Sunday June.