In 2004 the West Cork Choral Singers were invited to Wales to perform with the Ystradgynlais choir. We boarded the bus in Skibbereen at 3am on a Friday morning in October and sailed across the Irish Sea in near storm force winds, eventually arriving in Swansea some hours later than planned. We stayed in a hotel (an inspiration for Fawlty Towers?) in Mumbles, a pretty seaside town on the western side of Swansea Bay.

On Saturday evening we joined the Ystradgynlais Male Choir, led by musical director Conway Morgan, in a concert at St Cynog’s Church in Ystradgynlais. The Ystradgynlais men sang several favourites and soloist Eirian Davies gave a virtuoso performance of Italian arias and Welsh songs. Our performance included a selection from West Side Story and a chorus from the Messiah accompanied by Annabel Adams. Soloists were Anne Merwick, who sang in Irish in the ‘sean nós’ tradition, and Aileen Hickey, who sang the first verse of ‘She Moved Through the Fair’. Lorna Llewellyn, Diana’s daughter, also performed some Irish dancing. Finally the choirs joined together in stirring performances of Rogers and Hammerstein’s ‘You’ll Never Walk Alone’ and the Welsh national anthem. The concert was followed by a social gathering and disco.

On Sunday we toured the valleys and visited a castle, the one-time home of world-famous opera singer Madam Patti, where we sang, spontaneously, in the private theatre/opera house. As well as a rendition of the Irish love song ‘Gortnamona’, there was an informal performance of ‘The Policeman’s Lot’ led by Niall Hurley! 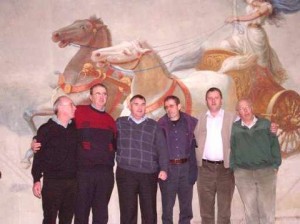 Also on the Sunday we visited the National Showcaves Centre at Dan yr Ogof, where we sang hundreds of feet underground in a cathedral-like cavern, surrounded by waterfalls, stalactites and stalagmites.

The Sunday evening session was memorable for great participation, including a graphic rendition by Lucy Hurley of ‘The Siege of Baltimore’. It seemed at one stage we had a coup and a new conductor was installed, but by morning this was just a distant memory.

On Monday we visited the Welsh National Folk Museum, where we saw houses, shops, barns and churches brought from their original location and reconstructed, brick by brick, to recreate how they would have looked around the mid-17th century.

The Monday evening concert was at St Elvan’s Church, Aberdare, at the head of the Rhondda Valley, a special location for Diana, who has family connections there and used to teach at the local school. Our joint programme with the Ystradgynlais Male Choir was similar to the Sunday evening. In addition, Eirian gave a spell-binding rendition of ‘If I Were a Rich Man’ from Fiddler on the Roof. Saturday’s concert was lovely, but we all felt Monday’s concert really hit the spot. Afterwards, in the pub across the square, the rafters were positively shaking as the two choirs combined to sing old favourites from Wales and Ireland. 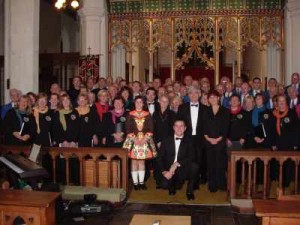