One of the greatest achievements of the choir to date was the performance of The Armed Man – A Mass for Peace by Karl Jenkins which took place in Schull Community College on 3 November 2007. This was the first performance of the complete work in Ireland

Since the start of the year the choir had been practising diligently, showing a high degree of focus and commitment and giving freely of their time to attend extra practices as required. The work itself was commissioned for the millennium and shows, both in the music and the accompanying film of visual images, the devastating consequences of war and concludes by expressing the profound hope that the next millennium will be a time of peace. The music is beautiful and the message profound and this touched the hearts and souls of the choir members and made them give of their very best. We were joined for the performance by Kamran, a Muslim caller from Bradford, two trumpeters from Wales, a cellist from England, two percussionists from Cork, our own pianist from Clonakilty and an organist from Bandon.

It was important that the music be synchronised with the film, but, thanks to the expertise of our Musical Director and local film expert Martin Levis, this was successfully achieved.
240 tickets had been printed to be sold in advance and we were very gratified when we discovered that we needed to print 100 more. Even so, there were yet more people who turned up at the door. The audience must have been around 360, which is huge considering the size of the local population. We discovered afterwards that some people had travelled from as far away as Cork city, a round trip of 140 miles.

The concert was introduced by our guest speaker Sean Love, the Executive Director of Amnesty International, who gave a short talk about the work done by Amnesty International, including harrowing descriptions of the plight of the people of Darfur.
The choir stood directly under the wall where the film was screened and used small battery-operated lights clipped to their folders so that they could read the music without any extraneous light detracting from the film. It was an amazing experience for the choir to participate in this venture and perform with such a wonderful group of professional musicians. The performance was dedicated to the people of Darfur and a donation (see photo) from the proceeds was made to Amnesty International.

The whole performance went extremely well and had a profound emotional effect on the audience, all of whom rose to give a standing ovation at the end. Performing a major work of such topical significance was a great challenge to the choir but enormously rewarding and we were proud to have brought a choral work of this magnitude to a small town in West Cork.

Diana Llewellyn and Joan Giller, representing the local Schull Amnesty group,  with a cheque for 500 euro for Amnesty International. 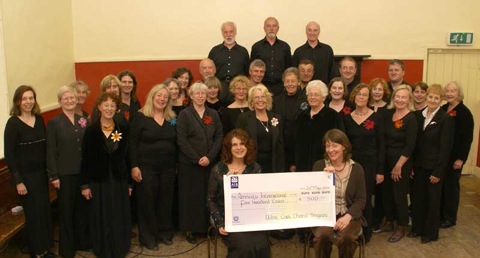